The new addition “landed” on site on 10th October 2019, mid afternoon. The main fuselage of the plane being transported by lorry, wings and landing gear followed on another two LGV’s. And so the process begins of converting another unusual vehicle into some form of unique accommodation

The plane, known as a Jetstream, didn’t actually get to us until mid afternoon leaving us with very little daylight left to get it onto its wheels with wings attached. A job obviously for the professionals (Everett aero) and not ourselves! Although we did stay to lend a hand. The first job was to get the fuselage lifted off the lorry and placed onto 3 LARGE jacks to allow the guys to fit the landing gear. As can be seen from the pictures, not a simple job. The next step was to fit the wings to the fuselage, again relying on some skilful placement from the driver and his crane whilst the rest of us rushed around to fit as many nuts and bolts as possible to hold them in place.

The job took us well into the evening and thus dark and also rain! After about 6 hours of frustrating work the days job was finally finished allowing the guys to lower the plane onto its wheels, remove their jacks and head home.

The next stage will be to start putting the rest of the outer parts of the plane together before finally starting on the conversion of the inside. These are jobs that will hopefully be done over the winter whenever we can squeeze it in between our “normal” work commitments.

3pm and we found ourselves with an hour or so spare and so decided to attempt the fitting of the back wing. Obviously with no prior experience this was a case of trial and a lot of error but before heading home we had managed to man handle it into place and secure it with a few bolts. Until next time……

Progress has been slow due to the weather but has meant that we have found time to strip out the inside before making plans to install wiring, underfloor heating etc.

In the last few days we have also found and attached the remaining external parts of the plane. Including finishing off the tail wing

Due to work slowing over the winter months and now the lovely corona virus, work on the Jetstream ground to a halt until now. We now have the wiring in and our first layer of insulation. Next comes the hard part of somehow lining the inside…..

Whilst plodding along inside the plane we have brought in the skills of Aaron Bailey (Bailey’s paint and body) to help spruce up the outside. Over the last week or so he has managed to rub down, prime and start applying the topcoat. Hopefully, weather permitting, this will give the plane a whole new look in the coming weeks.

Painting finished a couple of weeks ago, however we are still waiting for the replacement stickers before taking official photos, but it is looking good. Over the past few weeks we have been running cables, insulating and boarding out the inside with 3mm ply to provide a surface for the final fitting of our pvc cladding.

The past couple of weeks have been spent “decorating” and finishing the inside of the plane. PVC sheets have been used to finish the walls and ceiling. Under floor lights and ceiling lights installed. Bed frames either end of plane have been installed including a headboard with cushioning to create a pilots seat for kids to “fly the plane”. All of which can be seen in the slide show of photos below

Kaleb on My unique B&B-iPlayer 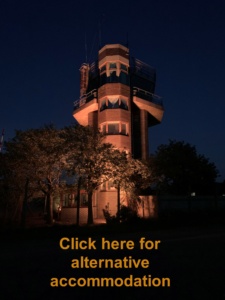